Opening in the browser an HTML file edited in Sublime Text

The people, maybe, who knows how to start the html file from Sublime Text? In NotePad ++, this can be done with shortcut Ctrl + Alt + Shift + X.

And as far as I know, Sublime is designed to add the necessary functionality;)

Everything is simple and depends on your OS a little.

in the open you need to write:

For Windows (I have 8.1 but should work for almost everyone)

In this case, double slash is needed for screening.

Actually everything, save the file as Chrome.sublime-build

Using the Build System is a function that allows you to open files that are editable in Sublime Text through other programs.

Personally, I have not earned the option proposed by Uv . Victor . Opened Chrome, but not editable document. In the console, the following output:

In my browser Pale Moon Portable on Windows 10, files are opened when the forward and backslashes are combined in the “build” file with the sublime-build extension as follows:

$file is a system variable meaning a $file is currently open.

Also in comparison with Victor's answer, I added a new selector parameter. If "text.html.basic, text.xml" when we automatically switch between the Build System: ( Tools → Build System → Automatic ), only XML and HTML files will be opened in the browser when invoking Build; XHTML). The parameter values ​​are the initial part of the “scopes”: open an empty file → View → Syntax → select the required syntax → get the scope in our empty file - how to do it, described in detail here , insert our scope in front of the selector . In HTML, HTM, and XHTML, the scope is text.html.basic , in XML, respectively text.xml . The listing, as seen in the example, is separated by a comma.

Yes, and in order not to press Ctrl + B each time, there are additional quick preview tools , but their review goes beyond the question.

For me, the most preferred. SublimeServer is an HTTP server implemented as a plugin for Sublime Text. Using it can eliminate the need for Open Server, WAMP Server, Denver, Mongoose, or their alternatives. Examples of the advantages of using SublimeServer in comparison with the usual opening of an HTML file through the Build System:

Install it like all other plugins via Package Control → Ctrl + Shift + P → SublimeServer: Start SublimeServer . Automatically run SublimeServer with Sublime Text does not work for me. In the file where we work, we click somewhere with the right mouse button, and in the context menu select View in SublimeServer . You can specify a hotkey: Preferences → Key Bindings - User → in the opened Default(Ваша операционная система).sublime-keymap file Default(Ваша операционная система).sublime-keymap insert { "keys": ["alt+home"], "command": "sublimeserver_browser" } , where alt+home → your hotkey combination. JSON syntax is used in the file, make sure that {curly}, [square] brackets and commas are correctly placed. The correct example of the sublime-keymap :

Files run from the sidebar, if the Sidebar Enhacements plugin is installed . We right-click on the file name in the sidebar → Open Run → the file will open in the program associated with it, for HTML this is usually the default browser.

If you want to open the file in another browser, you need to make the settings: right-click on the file name in the sidebar → Open With → Edit Applications... → in the opened file, paste the code and save it:

Click on the sidebar with the right mouse button on the file with the extension html or htm → Open With → Firefox Portable → the file will open in the portable version of Firefox. 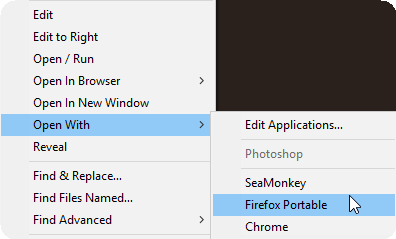 Recently, I have been using the Suricate framework to create commands. Multifunctional, one of its features is convenient work with teams.

Suppose we created a build system to open the current file in a specific browser and want to launch the command with hotkeys from the context menu, Menu Bar and command palette. Total need to edit four files: sublime-keymap , Context.sublime-menu , Main.sublime-menu and sublime-commands ; and including the sublime-build file of our Build System - 5. Moreover, we are forced to write the same text in the files; And so to customize each new command, which can be many. 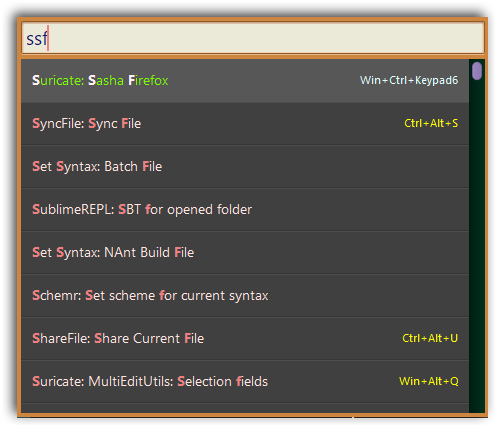 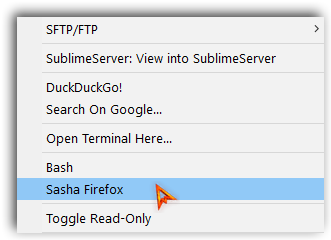 Save the file - it should work, as in the screenshots and screencast above. Do not be confused in the JSON syntax , make sure that the quotes, parentheses and commas are set correctly.

For the reasons stated in this answer , using SublimeServer is preferable to comparing with opening a file through file:/// . Add the following code to the same Default.suricate-profile file, where the example for Firefox was added:

That's how I run the files in the browser. I dropped the launch from Menu Bar and the context menu in the example, since I don’t use it.

The syntax of the call value for the default and plugin commands in Suricate is the following: sublime.$команда . The register matters, Sublime.sublimeserver_browser will not work, as well as suricate.lib.process.spawn in an example above.

The capabilities of Suricate are far from being limited to those described in this answer.