Two raster images of the same size are given, the colors of which pixels are specified in the RGB color space with a color depth of 8 bits for each color coordinate: 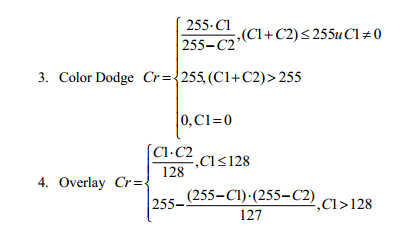 Determine which of the layer blending modes was used to obtain each of the above resulting images. In the answer specify four numbers in a row without spaces. First, the number in the list of the layer blending mode, which is applied to obtain the first resulting image, then the mode number used to obtain the second image, then the third and the fourth, respectively. Note: the values ​​of some colors on the images may differ from those obtained by the above formulas by several units.

Thanks in advance for the answer!

The color coordinate in this case is the color of the pixel (dots in the image), represented in the RGB format. This format represents all colors as a mixture of red (R), green (G) and blue (B) colors in different proportions. The share of each color is given by a number from 0 to 255. Example: RGB (255, 0, 0) - red, RGB (255, 255, 0) - yellow, RGB (0, 255, 255) - light green, RGB (255, 255 , 255) - white, RGB (0, 0, 0) - black. Try to pick colors in Paint in the expanded palette and see which RGB values ​​correspond to which color. The rest is a matter of technique. In picture 2, the colors are clearly defined: (0, 255, 255) and (255, 0, 255). In the first picture you take a point where the color is determined quite accurately (for example, a point of pure red color), and then you substitute each component separately into formulas and get the color of the resulting pixel. Looking for a match on the resulting images. You may have to take several points in the first picture to uniquely determine the correspondence.